My great great great uncle, Private Arthur David Pullen, was in the First World War and was 24.

Arthur David Pullen was born in 1894, the son of Mr and Mrs W.J. Pullen of the high street, west Mersea. A fisherman in civilian life, he was always known by his second name, David, and earned the nickname ‘Dash’. He was one of the many Mersea men who answered Kitchener’s call for volunteer and in Autumn 1914 he enlisted at Colchester, joining the 10th battalion, Essex Regiment.

Arthur also earned some medals during his time in the army:

Here is a little extract to show how brave he was…:

Earlier in the day Arthur David Pullen was wounded in the face and neck by shrapnel. Despite his wounds, he carried on towards the enemy trenches where he captured, single handedly, seven Germans. He then proceeded to take them back to Headquarters, which were two miles to the rear. On was shot as he tried to escape, but he was successful in bringing back the other six.
For his gallantry he was awarded the Military Medal.

He received the following letter as he recovered from his injuries at West Mersea:

To 12866, Private A.Pullen, High street, West Mersea. It is with great pleasure that on behalf of the Commanding Officer I forward you a parchment awarded to you by the Divisional General for your gallant conduct in the early stages of the Somme Battle. The Commanding Officer, Officers and men of the regiment congratulate you and hope that you are nearly fit to come and fight the Huns again. It may interest you to know that the regiment has added still more glory to its name. (Signed) R.A. Chell, Captain and Adjutant.

Summer was nearly over and, symbolically,
this was to be the last harvest of an era –
the world would never again be quite the same.

“When war was declared on 4 August 1914, I had just taken over my little farm, East Barn, which adjoined Waldegraves. There were about fifty acres with barn and cattle yards and, as luck would have it, I was about to gather in my first harvest.

Farmers were encouraged to harvest before joining up and this was infuriating as I, like most other young men, was desperate to get off to the war. Percy Roberts a great friend of mine, was also waiting to enlist and, as we both had motorcycles, we decided to enlist together.

As soon as the harvest was gathered in we reported to the Albert Hall in Colchester, where we passed our medicals. We then signed up, asking to be posted to the 11th Hussars, who were then based in Colchester, as we were keen on riding and thought it would be great fun to join the cavalry. It was a fortuitous request to have made, because had I gone into the infantry my name would quite probably have been on the fatality lists beginning to come back from the Front.”

Extracted from ‘Pearls & Oysters’ by Harry Pearl Cross 1892-1988.
With kind permission of his grandson Russell Wheldon.

Commuting from Mersea did not exist as we know it today, and even travelling to work in Colchester daily would have been difficult from the island.

Read more about the Farmworkers, Fishermen and Crews of Mersea – Click here.

Edgar George Roberts joined the Honourable Artillery Company and was a Driver in its B Battery. He went with this unit to Egypt on 9 April 1915.

Born in 1916 Mick came as a puppy from Leicestershire to his master when he was training as an air pilot at Northolt Aerodrome.

Mick loved Edgar Roberts, his master, and was gentle and loving to all mankind. He flew with Edgar and was always his companion, except when Edgar went abroad to fight in the war.

Demobilized at end of the war. Returned to civilian life as Pest Control Officer (specialising in rats) at Ivy Farm

Follow our diary through the war years as part of our commemoration of the First World War and the events leading up to it.

Entries kindly maintained by local Historian Godfrey Thomas, author of Every one a Hero, the stories behind the names on War memorials in three local schools.

1st   Germany and France agree arrangements for the exchange of prisoners 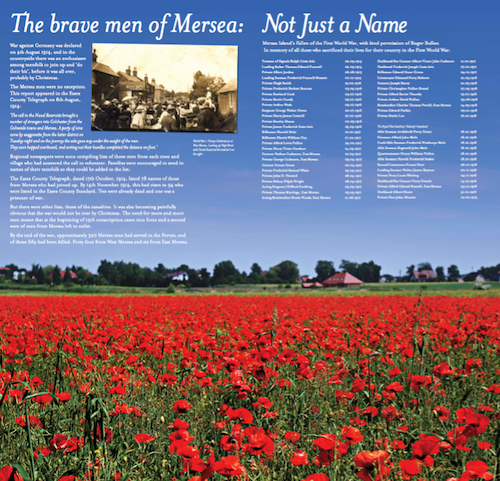